It is undeniable that the landscape of statewide assessment has changed in the past several years. From the growing importance of consortia, the increasing recognition of the unfair impact of testwiseness on test scores, to the COVID 19 pandemic necessitating a move to remote learning and test administration, SEAs and LEAs have faced a host of new challenges. These changes have likewise impacted how we ensure test results are valid and reliable. Test security is more important than ever before, and it is necessary to evaluate just what has changed and how we should adapt.

However, before diving into just what is new regarding test security of statewide accountability assessments, it is critical to acknowledge that many of the core tenets of test security remain the same, and many of the guiding principles continue to be as relevant as ever. Despite the changes of the past decade, these principles should remain the foundation of our security efforts. Let’s look at each in turn: 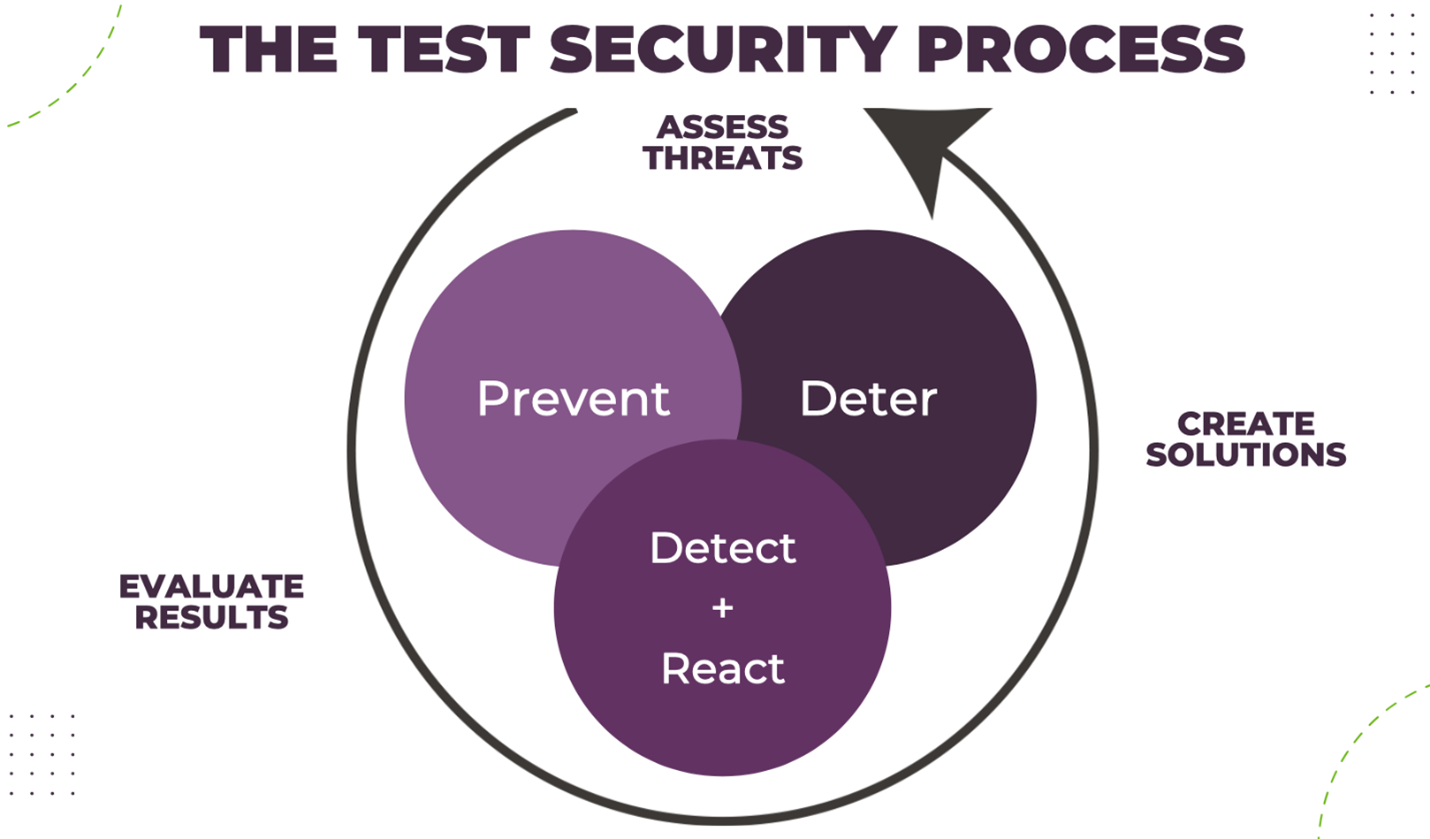 As Benjamin Franklin proclaimed so insightfully, “An ounce of prevention is worth a pound of cure.” Or, in the case of K12 summative testing, a pound of detection and reaction. To the best of their abilities, SEAs and their vendors should implement policies and technologies that help prevent test fraud.

Prevention is defined as actions a program can take to actually stop or reduce the risk of test fraud before it occurs. (An added benefit—while not its primary purpose, preventative solutions can have a significant deterrent effect as well when the scope and effectiveness of those solutions are communicated broadly.) Preventative measures are versatile and can (and should) be implemented at every stage of the assessment process.

Think of deterrence as a communication plan meant to discourage and inhibit individuals from cheating or committing other forms of test fraud. Remember that deterrence measures are only effective if they are made known, which means they should be announced and published.

A good analogy for thinking about deterrence is the surveillance cameras used in retail stores. Through signage, businesses communicate their security measures that can catch shoplifters in the act, deterring would-be thieves from even attempting to steal merchandise. The same is true of communicating test security policies; by communicating the consequences of being caught cheating, you can deter individuals from ever attempting to commit fraud in the first place.

In addition to offering the greatest return with regard to test security (in addition to prevention), one notable outcome of deterrence is that it lets students, proctors, and administrators, know what is and is not acceptable. The majority of examinees have a sincere desire to honestly take their exams. Having clear guidelines and communicating what is allowed before, during, and after the exam can help honest test takers avoid any “gray” areas when preparing to take their test, providing assistance, or providing information about the test that shouldn’t be shared.

Deterrence typically involves undertaking a series of steps starting with establishing clear rules and ending with publicizing incidents when those rules have been broken and consequences enforced. These steps are:

Examples of deterrence include (but are not limited to):

As stated above, these communications should be offered numerous times and through a variety of methods—including in-person, via emails, throughout trainings, posted on signage, as part of the test administration instructions, etc.

Detection solutions are designed to detect a test security incident while it is occurring or shortly thereafter. Once an incident is detected, it should be followed with an immediate, specific, and almost automatic pre-determined set of responses.

While the two categories of detection and reaction are often discussed separately, it’s vital to mesh detection and reaction strategies into one smooth and seamless process. Those “automatic” responses have been strategically pre-planned and formulated to stop that specific type of breach from harming your test scores, and they have been custom-developed to quickly and efficiently mitigate any damages that have already occurred.

Please note that while we refer to the follow-up step as “reaction”, it is often called “investigation.” An investigation is one type of reaction a SEA or LEA could undertake in the event of a security incident.

As early as 2013, test security best practices outlined the necessity of checking the adequacy of test security methods on a continuing basis. The two Guidebooks created by TILSA comprehensively covered certain methods of detection, specifically data forensics, and were a recognition of the need to share ideas and information across states and their vendors. There was considerable variation across states as to what issues were addressed and by whom. Some states relied primarily on vendors with or without extensive test security requirements. Others had requests for proposals requiring test security actions and also carried out their own activities, such as regular testing observation programs.

Policies and procedures surrounding the use of detection methods have advanced in the ensuing years both with regard to the use of data forensics to determine the validity of test scores, as well as the use of other detection methods such as patrolling the web for test content as well as conducting test administration monitoring to determine that test security rules and regulations are being correctly implemented and followed.

Topics from this blog: K-12 Education